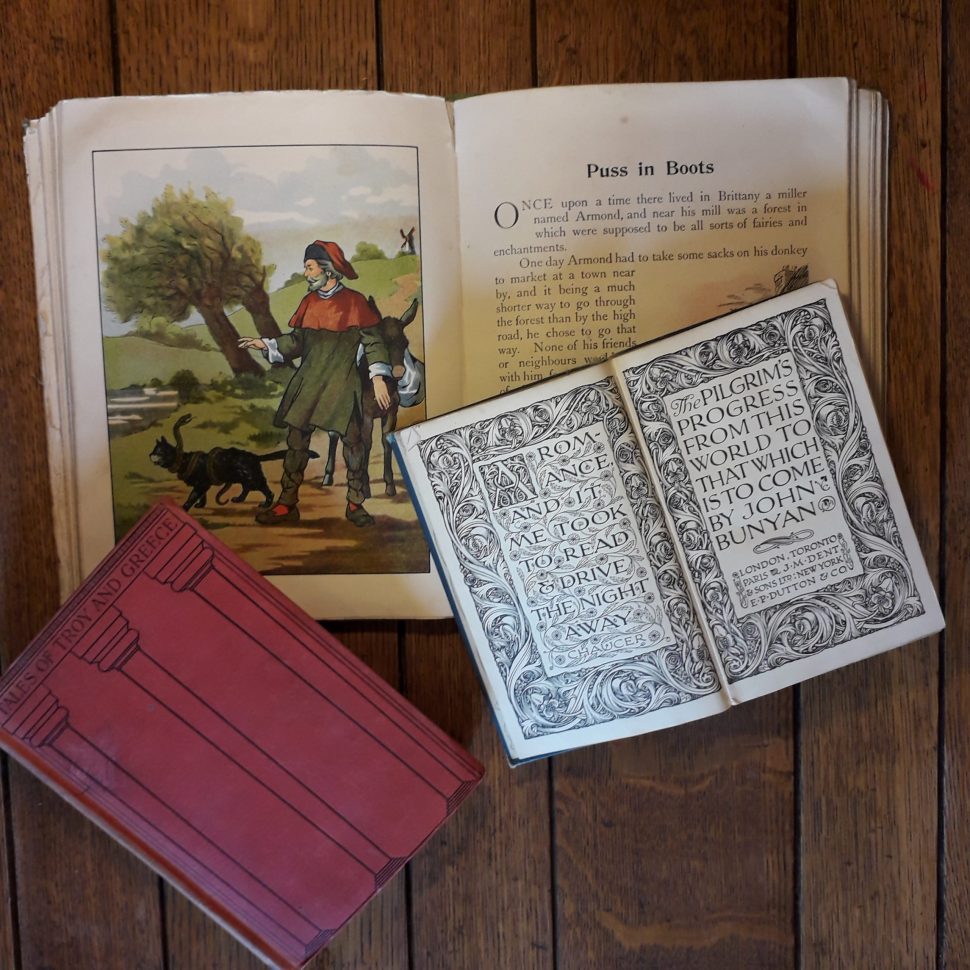 Except in Form I the study of Literature goes pari passu with that of History.

In Form I, Literature is known as ‘Tales’, and is a gentle introduction to the art of reading and narration which will form a large part of school lessons.

Fairy tales, (Andersen or Grimm, for example), delight Form lB, and the little people re-tell these tales copiously, vividly, and with the astonishing exactness we may expect when we remember how seriously annoyed they are with the story-teller who alters a phrase or a circumstance. Aesop’s Fables, too, are used with great success, and are rendered, after being once heard, with brevity and point, and children readily appropriate the moral […] There is no attempt to reduce the work of this form, or any other, to a supposed ‘child level.’

In Form IB the students begin by having simple fairy tales and fables read to them, which they are then required to narrate back to the teacher / parent. The programmes laid this out in the following way:

(a) A Book of Fairy Tales

Every term the students of Form IB were assigned three fairy tales, specifically either from The Grimm Brothers, or Hans Christen Andersen.

The students were assigned three fables from Aesop’s Fables. The moral sometimes inserted at the end of the fables would not be read to the child. [Aesop’s Fables are often very short and will not take up a whole twenty minute lesson. The time left over after the narration can be offered to the child as a natural reward for completing their work in good time].

Other books which were mentioned just once on the programmes for Form IB Tales were The Fairy Ring, Book VI, and Kipling’s Just So Stories.

Form IA (7 to 9) hears and tells chapter by chapter The Pilgrim’s Progress and the children’s narrations are delightful. No beautiful thought or bold figure escapes them. Andrew Lang’s Tales of Troy and Greece, a big volume, is a piece de resistance going on from term to term. The great tales of the heroic age find their way to children’s hearts. They conceive vividly and tell eagerly, and the difficult classical names instead of being a stumbling-block are a delight […] it is necessary that two years should be spent in Form IA and that in the second of these two years the children should read a good deal of the set work for themselves.

The books assigned in Form IA were a step up from the fairy tales and fables introduced in IB, but as before there were two main set texts assigned each year.

Each year without fail Mason assigned The Pilgrim’s Progress, by John Bunyan, published by The Religious Tract Society, in Form IA. Both the First and Second Part of the story were assigned and were read over the entire two years of the form. The readings were broken down term-by-term as follows:

The second book assigned to the students in Form IA was always a book on Mythology. This was almost always Tales of Troy and Greece, by Andrew Lang, published by Longmans. [Another book that appeared on the programmes a few times was Lamb’s Adventures of Ulysses]. The readings amounted to between 44-52 pages per term (around 4-5 pages per lesson)i and were generally broken down as below:

The aim of this website is to spread our love of the Charlotte Mason Method by providing a comprehensive and straight-forward resource for home educating parents, primarily located in the United Kingdom, who are following the Charlotte Mason philosophy of education in their homes.

New content will be released regularly but this website will not be treated like a blog, but as a living resource which will hopefully save parents time and frustration in finding the information they require quickly and efficiently. We therefore reserve the right to edit and update the content of these pages as and when necessary, and whenever new information presents itself.

Unless otherwise stated the information shared on these pages is based upon the principles and practices of Charlotte Mason; and the workings of the Parents’ National Education Union (P.N.E.U.), the Parents’ Union School (P.U.S.), and the Practicing School.

We hope this will prove a valuable resource for not just U.K. home educating mummies (and daddies), but anyone who, like us, has caught the C.M. bug. May it forever continue to remain infectious!

Head over to Charlotte Mason Poetry to read my article, The Story of The Counties of England.

*** Free standard shipping on all orders placed throughout the United Kingdom. *** If you live outside of the U.K. you may wish to visit our international shop, which allows for lower shipping rates worldwide. You can find our international store over at www.charlottemasonbeehive.com Dismiss